The following is a blog from Jamie Wilkes, author of Morgana and Agamemnon, two parts of The Bunker Trilogy.


--
It was in researching Arthurian legends that I stumbled on the key to getting my head around writing the Bunker plays. It was an invaluable learning curve that would again prove useful a year later when it came to sitting down in front of my laptop to create three new adaptations for 1930s Chicago.

There was a vague idea that one of The Bunker Trilogy should be taken from the King Arthur stories – Jethro was set on Macbeth as one of the three and we were leaning towards a Greek to round them off. Three plays, set in a first world war dugout for four actors. That was the criteria. I quite like criteria for writing, they can be nice boundaries that give you exciting challenges and points of inspiration. The Bunker gave us some lovely contradictions to try and work out - we had an epic setting to present on an intimate scale; we wanted timeless classics to be rooted in the first world war; we wanted to transport an audience to a different world but only let them see one room. Storytelling, luckily, is pretty adept at helping you do any of those things. 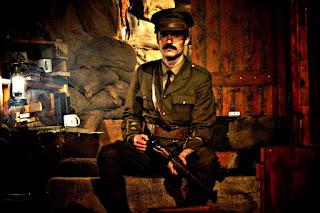 So there I was researching the countless different incarnations of King Arthur and his knights of the round table. It quickly became apparent that the really interesting character to throw into the mix would be Morgana. In a world populated exclusively by men, what happens when you introduce a witch? And how do you create a vividly realistic world and then change the rules and bring in a supernatural element? The other major problem was …which witch? In the countless incarnations of Arthurian legends there are many contradictory depictions of Morgana (or Morgen, Morgaine, Morgant, Morgne, Morge, Morgue of Morgan le Faye). But that was cool. Some said she was a Welsh Goddess, others that she was Arthur’s half sister, an apprentice of Merlin, a lover of Merlin, a lover of Lancelot. Many places in the world claim that she lived there – her birthplace could be anywhere over Europe including one legend that she emerged from a volcano.


So Morgana was this shapeshifting legend that seemed to mould to the storytellers needs. And this was perfect. It’s something we do all the time. We sculpt stories to what we want them to be and here we had a character who had evolved and been many things to many different people. And that was the doorway in. How might Morgana and the other characters of Arthurian lore evolve into this new WWI setting? There was suddenly a freedom in knowing I was just one of many people to shape these characters – it’s what keeps them alive. And so the chivalry of Arthurs knights became the honour of English boarding school boys. Their band of knights became one of the many pal’s battalions that joined the Great War to fight side by side. Merlin their old headmaster. The rest is as you see it in the Bunker trilogy.

The character of Morgana though has retained that shape shifting nature. As she is through literature, she is many different things to many different people. Each character has their own version of her and that is how she slides into the frontline dugout in the trenches. She haunts the knights.

Having unlocked this way of looking at these stories it became easier to mould our Greek tragedy to the Bunker setting. Agamemnon became the obvious choice with it being so entwined in war. It’s a war hero returning which fitted nicely with the other three slices of the trilogy. It offered a glimpse of the WWI story for those that returned. In this one though, Agamemnon’s royalty is gone, he and his wife are no king and queen – in fact they are never named in the play but their character arcs are still intact. It is still a tale of revenge with a twist of perspective. We leave the trench through Agamemnon’s delirious eyes – his guilt concocting a tale of bloody recompense. It is the same story but evolved several thousand years into the future. 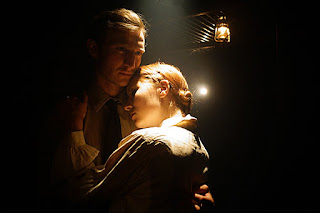 Looking back on the trilogy three years later is interesting. As a writer I’ve evolved three years into the future – there would be things I’d change of course but you always have to let go otherwise you never stop redrafting and you can end up adapting adaptations and you lose sight of your original story. The story has to be at the very centre no matter what version you tell. What’s so wonderful about working with stories several centuries old is that they have survived for a reason. No matter what you do isn’t going to change them too much – you could never vandalise them beyond repair. They are robust and can take some heavy handed moulding. That gives you a lot of freedom as a writer – knowing your insignificance. It also means you can bring the stories to you, to whatever prism you want to look at them through, to borrow them from ancient Greece or medieval lore and place them down somewhere else. Treat them the right way and they are more than big and bold enough to feel right at home.


The Bunker Trilogy runs at the Adelaide Fringe Festival 2016, from 12 Feb - 16 March. More info at www.TheBunkerTrilogy.com
Posted by Jethro Compton at 3:51 AM 1 comment: